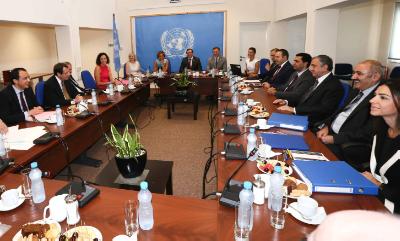 A federal Cyprus should be financially viable and committed to capitalizing on the economic opportunities that will open up as a result of reaching a final settlement, said Special Adviser of the Secretary-General on Cyprus Espen Barth Eide

He was speaking on behalf of the Greek Cypriot leader Nicos Anastasiades and the Turkish Cypriot leader Mustafa Akıncı after their meeting on Friday at the UN Protected Area in Nicosia.

He also said the process is moving forward at a quite impressive speed, and that is due to the leaders` contribution.

In his remarks, Eide said the leaders concluded their sixth meeting, adding that “since we last met, we have had the most intense period of negotiations to date with substantive, daily meetings”.

Parallel to the meetings of the negotiators, he said, working groups on property, the economy and European Union matters meet with increasing frequency, making progress on some key issues.

At today’s meeting, he noted, the leaders continued to focus on aspects of governance and power-sharing, on property, criteria on territory, cross cutting European Union issues and economic matters. The leaders also discussed the ongoing implementation of a range of confidence building measures.

He said the leaders recognize the importance of having the principles and values upon which the European Union is founded upheld and embedded in the comprehensive settlement, whilst respecting its bizonal and bicommunal character. “The working group on European Union matters held its first meeting this week. The leaders welcome the European Union’s commitment to help the achievement of a comprehensive settlement and to prepare for the application of the EU acquis throughout the island. In this context, the upcoming visit of the President of the European Commission, Mr. Jean-Claude Juncker to Cyprus will provide a good opportunity to further underline the European Union readiness to assist the United Nations-led process”.

Stressing the importance of the economic dimensions of a settlement, Eide said Anastasiades and Akıncı have also focused on this vital issue. “In today’s global economic climate it is essential that a functional, federal Cyprus is financially viable and committed to capitalizing on the economic opportunities that will open up as a result of reaching a final settlement. This will be done in close cooperation with the relevant international financial institutions”.

He continued that the leaders “reaffirmed their unwavering commitment to a settlement and look forward to their next meeting scheduled for Monday, 27 July 2015”.

In a second statement that he made after the leaders` departure from the UNPA site, Eide said that “the dynamic energy and positive climate that has been created are beginning to pay real dividends”. The sides, he said, “are not only engaging constructively with each other. They are also demonstrating a clear focus on making substantive, daily progress on core issues”.

He credited the leaders for moving away from a more traditional position of defending historically entrenched positions, and “moving into a partnership mode where problems are there to be solved”.

Eide referred to the event earlier this week, hosted by the Chambers of Commerce, where the leaders made “strong statements of a vision, and they are highly compatible and both of them speak about the future of a united Cyprus and the economic opportunities that this will entail. As you will have noticed in the statement, this was also an issue today. I want to underline the significance of what was said here now, that we will engage in a much more systematic manner with the relevant international financial institutions, in addition of course to the European Union”.

Eide expressed hope “that this engagement with all forms of civil society groups will continue. It is crucially important that the leaders inform their public audiences, address the potential concerns, and ultimately win the support of all Cypriots for the success of these talks”.

The UN diplomat repeated that neither the leaders nor him will answer specific questions on the specific content of either chapter or either convergence because that has to be an integral dimension of the talks.

He said that the week after next he will be meeting with the UN Security Council to update them on the negotiation process and said “it is truly exceptional that the United Nations Security Council stands united in support of a settlement in Cyprus”.

“This process is definitely on track and is moving forward at a quite impressive speed, and that is very much something, as I have said, that is a tribute to the two leaders,” Eide concluded.

Cyprus has been divided since 1974 when Turkey invaded and occupied its northern third. The leaders of the two communities, President Anastasiades and Turkish Cypriot leader Akinci have been engaged in UN-backed talks since mid May with the aim to reunite the island under a federal roof.