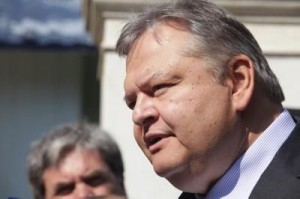 The presence of the Turkish research vessel “Barbaros” in Cyprus` exclusive economic zone (EEZ) and continental shelf and its intended research activity there constitute a “brutal violation of the international law of the sea”, Greece`s Deputy Prime Minister and Foreign Minister Evangelos Venizelos has stated on Monday.

In a written statement, Venizelos notes that Turkey is undermining peace talks in Cyprus and instigates tension, at a time when the international community is focused on Kobani and the fight against international terrorism.

He goes on by saying that there is no dispute in the region, concerning the delimitation of the continental shelf and the EEZ of the Republic of Cyprus, since “Turkey does not have any claims there”.

He adds that Turkey seems to act on behalf of the illegal puppet state it has set up in the northern part of Cyprus, occupied since 1974 by Turkish troops. Therefore, the core of this matter lies in Turkey`s refusal to recognize the Republic of Cyprus, a UN, EU and Euro area member state, that is being recognized internationally by all UN members, except Turkey, says Venizelos.

The Greek Foreign Minister calls on Turkey to “change course” not only with regards to its vessel, but also in its foreign policy orientation and align itself with international legitimacy, while assisting and supporting Cyprus talks.

The framework of legitimacy is the safe framework for Greek-Turkish relations, as well as for Turkey`s European path, Venizelos concludes.

Turkey, whose troops occupy Cyprus` northern part since they invaded in 1974, does not recognise the Republic of Cyprus, in spite of repeated calls by the EU to normalize relations with Nicosia.

A NAVTEX (Navigational Telex), a notice to mariners by Turkey, advising that it was reserving areas south of Cyprus – including parts of the country`s EEZ – for seismic surveys, entered early on Monday morning into force, until December 30.

Following Turkey’s provocations, President Anastasiades has recently announced his decision to suspend his participation in the UN backed negotiations which aim to reunify the island under a federal roof.