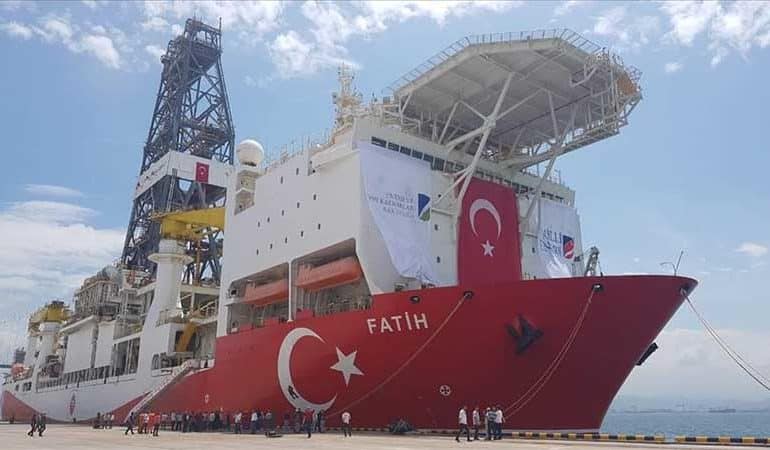 Our intention is to resume negotiations for a Cyprus settlement, however negotiations are not possible “with Turkish ships violating the sovereign rights of the Republic of Cyprus and creating tension” Government Spokesman Prodromos Prodromou said on Sunday.

Speaking at the Presidential Palace and asked if the President of Cyprus would be willing to attend a Crans Montana-type meeting, with a Turkish drill ship present in Cyprus’ exclusive economic zone (EEZ), Prodromou said that this is a hypothetical question. “If the UN proceed to invite the President of the Republic, we will examine the prevailing conditions, the position of all sides and first and foremost of Turkey and we will react accordingly” he added.

He said that the Greek Cypriot side seeks the resumption of settlement talks, while Turkey tries to avoid them.

A meeting in line with the Geneva and Crans Montana format, with the participation of the EU, brings Turkey vis-à-vis its obligation to take a stance concerning the termination of the occupation of Cyprus, the withdrawal of troops and the abolition of guarantees and intervention rights, Prodromou added.

Asked if the President of Cyprus discussed Turkish provocations with other counterparts, the Spokesman said that the issue is on the agenda of his meetings on every occasion. On another question, whether the issue will be included in the agenda of the forthcoming informal European Council, on May 9, in Romania, Prodromou said that “depending on the situation next Wednesday, this will be one of the issues the President will raise with his counterparts.”

Prodromou also said that Nicosia expects Ankara to make second thoughts regarding its intention to drill in Cyprus’ EEZ and noted that the arbitrary handling of the issue is isolating Turkey. Moreover, he said that the government was content with the reaction of the European Commission, Egypt, Russia and Greece.

The Government Spokesman referred to a series of preventive measures which the government in Nicosia is already implementing and said that there were additional measures in its disposal. It would not be to our benefit to make these measures public, Prodromou added and said that they will address the issue, which is destabilizing the area, together with the EU.

Asked if the Republic of Cyprus will issue an international arrest warrant for those involved in the actions of the Turkish drill ship and other companies that assist illegal activities in the EEZ of Cyprus, Prodromou said that individuals who are engaged in illegal activities have personal responsibility and they may be held accountable. “This is one of the measures designed by our government” he added and said that all those involved in the violation of the EEZ of Cyprus “may be certainly prosecuted by international justice.”

“We will take all measures which are in our disposal through our international relations, Cyprus’ membership to the EU and international law” Prodromou concluded.

Cyprus has been divided since 1974, when Turkey invaded and occupied its northern third. Repeated rounds of UN-led peace talks have so far failed to yield results. The latest round of negotiations, in July 2017 at the Swiss resort of Crans-Montana ended inconclusively.

Turkey issued a navigational telex, announcing its intention to start drilling off Cyprus until September 3. The Turkish drill ship “Fatih”, accompanied by three service ships, is located almost 40 nautical miles west of the Akamas peninsula and 83 nautical miles from the Turkish coast. The area falls within the EEZ and continental shelf of the Republic of Cyprus.

There have been a number of responses from the international community:

The United States discourages any actions or rhetoric that increases tensions in the region, a U.S. Embassy Spokesperson said in a statement issued here today. According to its longstanding policy, the statement notes,  “the United States recognizes the right of the Republic of Cyprus to develop its resources in its Exclusive Economic Zone and believes the island’s oil and gas resources should be shared equitably between both communities in the context of an overall settlement”.

Moscow expresses concern over Turkish drilling in Cyprus’ EEZ
Moscow expresses concern about the escalation in the exclusive economic zone of Cyprus. In an announcement regarding the Turkish drilling in Cyprus’ EEZ, the Russian Ministry of Foreign Affairs says they are “deeply concerned about information regarding the escalation of the situation in the Eastern Mediterranean.”

The UK is following developments in the Eastern Mediterranean with concern ,a spokesperson of the UK High Commission in Cyprus told CNA, invited to comment Turkey`s intention to conduct drilling activities within the Cyprus’ Exclusive Economic Zone.

“We are following developments with concern. We are in close touch with governments of Cyprus and Turkey. We wish to see the situation deescalated,” the UK High Commission spokesperson said.

In her statement, Mogherini expressed grave concern over Turkey`s announced intention to carry out drilling activities within the Exclusive Economic Zone of Cyprus., urgently calling on Turkey “to show restraint, respect the sovereign rights of Cyprus in its exclusive economic zone and refrain from any such illegal action to which the European Union will respond appropriately and in full solidarity with Cyprus.”

France has called the Turkish authorities to avoid engaging in provocative action and pointed out that Cyprus can count on the solidarity and support of France and the European Union as expressed by the High Representative, Federica Mogherini.

“At the moment when Turkey announces that it is about to conduct drilling activities in the Eastern Mediterranean, part of which is overflowing into the exclusive economic zone of the Republic of Cyprus, France reiterates its unwavering commitment to the respect of international maritime law and sovereignty of Cyprus”, says a press release issued by the French Foreign Ministry, in view of Cyprus FM`s working visit to Paris, on Tuesday.

According to the press relase, France urges the Turkish authorities to avoid engaging in provocative action, clearly contrary to international law, which can only increase tensions in a region that needs stability. “The Republic of Cyprus can count on the solidarity and support of France and the European Union as expressed by the High Representative, Mrs Mogherini”, the statement reads.

Cyprus Ministet will hold discussions with Jean-Yves Le Drian,  Minister of Europe and Foreign Affairs and Amélie de Montchalin, the Secretary of State for European Affairs.

According to the statement, following the minister`s visit to Cyprus in September 2018 and in the wake of the visit of the President of the Republic to Nicosia on 29 January, the ministers will discuss the importance of the bilateral relationship, its strategic nature for both countries. in the Eastern Mediterranean, and its development in the field of defense and energy.

“They will also discuss the Cyprus issue, on which France remains ready to support the efforts of the parties, when they are ready, for a resumption of negotiations. Finally, they will discuss major international issues, notably Syria, and European issues, in particular migration issues, while Cyprus is particularly concerned by the flow of the eastern Mediterranean route”, the statement says.

Amélie de Montchalin, Secretary of State for European Affairs, will also receive Nikos Christodoulides to discuss major European issues, in particular Brexit, the balances of the next multiannual financial framework, and further integration of the euro area.

“In the run-up to the informal European Summit on 9 May, they will also discuss the main challenges for the future of the European Union, while the next strategic program should allow the concept of European sovereignty to be broken down”, the statement reads.