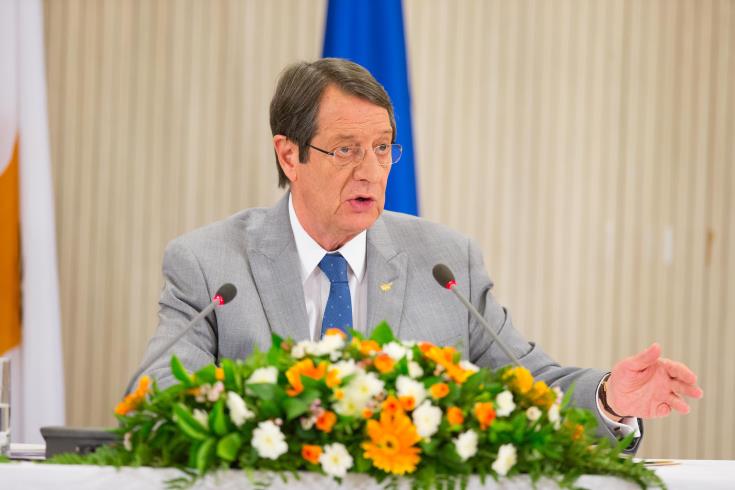 Everyone in Cyprus should be after a solution that will bring about lasting peace and stability, says President of Cyprus Nicos Anastasiades, while noting the need for the two communities to respect each other’s rights in order for this endeavor to succeed.

In a televised message to the people of Cyprus for the New Year, President Anastasiades also says that a new effort for a Cyprus solution requires boldness.

“Everybody should be after a Cyprus solution that will bring about lasting peace and stability, and this can only be achieved through mutual respect for the rights of both communities and of the citizens as a whole” he notes.

He also says that despite the intense efforts made, the unacceptable situation in Cyprus continues to be an open wound, with all the adverse consequences that emanate from this.

“In order to reverse the consequences, we are cooperating, with the same political will and through bold initiatives, with the UN Secretary General’s Special Adviser Mrs Lute to formulate, together, the terms of reference that will allow for the resumption of a productive dialogue, in order to reach a solution that will bring peace and stability in our Cyprus” the President underlines.

He adds that a solution needs to be based on international law and the principles and values of the European Union, and which will lead to the development of a truly independent and sovereign state, free of guarantees, intervention rights or the presence of occupation troops.

The President says moreover that in line with this settlement, the respect for political equality will not lead to the development of a dysfunctional structure with foreseeable adverse consequences both for Greek Cypriots and Turkish Cypriots.

This new effort we are making, requires boldness and strict compliance with all the elements comprising the basic ingredients of a normal, functional federal state that is in accord with the European institutions, customs and laws, the President notes.

He assures finally all that he will work tirelessly towards achieving this goal.

President Anastasiades also wishes that our Turkish Cypriot compatriots comprehend that the termination of the present situation and the uncertainty it creates, is the only prospect for a bright and common future.

In his televised message, the President also refers to government initiatives in a series of areas, both in relation to the interior and the country’s foreign relations.

Among others, he notes that Cyprus managed to achieve one of the highest growth rates in the EU, at 4%, while recording the largest reduction of unemployment, which receded to 7.3%.

At the same time, Cyprus managed to record a budget surplus for a fourth consecutive year, he adds.

With regard to the energy sector, President Anastasiades says that the government moved forward with its energy plans, despite Turkey’s threats and illegal activities.

He also notes that in cooperation with opposition parties, the biggest reform since the founding of the Republic of Cyprus goes on, concerning the gradual implementation of the General Health Scheme or GESY.

The President expresses finally his expectation that 2019 will be a decisive year for the future of Cyprus, a year of creative dialogue that will bring about peace, stability and prosperity for all the people.

The Republic of Cyprus has been divided since 1974, when Turkey invaded and occupied its northern third. Repeated rounds of UN-led peace talks have so far failed to yield results. The latest round of negotiations, in July 2017 at the Swiss resort of Crans-Montana ended inconclusively. Cyprus is a full EU member state since 2004.