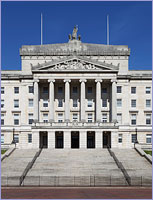 The remarks were made during a parliamentary session in Ireland’s Parliament on Turkey’s accession course, in the presence of Turkish Minister for EU Affairs and chief negotiator in accession talks with the Union, Egemen Bagis.

Ireland assumes the Presidency of the Council of the EU on January 1st. Cyprus, which joined the EU in May 2004, assumed the EU Presidency for the first time in July this year.

During Cyprus’ EU Presidency Turkey, which aspires to join the bloc, refused to have any kind of relations with the Presidency, an attitude that was condemned by all EU institutions and many of Cyprus’ EU partners.

According to an official statement issued today by the Press and Information Office in Nicosia, the Irish MPs also noted that the withdrawal of the Turkish troops from Cyprus’ northern Turkish occupied part as well as the withdrawal of all Turkish settlers are prerequisites for the continuation of Turkey’s membership talks.

Referring to the UN-led direct talks for a political settlement in Cyprus, MPs noted that the negotiations should carry on from where they were left by Cyprus President Demetris Christofias and former Turkish Cypriot leader Mehmet Ali Talat.

The MPs further pointed out that occupation and illegal settlement of Cyprus’ northern areas are international crimes, adding that there must be progress in the humanitarian issue of missing persons, calling on Ankara to provide access to its military archives and army areas.

The Irish Parliamentarians further demanded the return of all legal citizens to the occupied town of Famagusta and pointed out that Ankara must normalize its relations with all its neighbors, including Cyprus.

Referring to Cyprus’ Exclusive Economic Zone (EEZ) and hydrocarbon reserves, the Irish MPs stressed out that Cyprus’ sovereign right in its EEZ should be respected.

Cyprus has been divided since 1974 when Turkey invaded and occupied its northern part. The latest round of UN-led talks began in 2008 with an aim to reunite the island under a federal roof. So far, little progress has been achieved and the negotiations have reached an impasse.

Speaking before the Irish Parliament two weeks ago, he said, inter-alia, that the Cyprus problem should not be an obstacle in his country’s EU course and that Ankara is in favour of a solution to the island that is based on “political equality” between the two communities, the Greek Cypriots and the Turkish Cypriots.

He went on to say that “nobody should challenge Turkey’s military capabilities or push Turkey away from the Union”, warning at the same time that “if Turkey is provoked or challenged in any way, both Cyprus and Europe will regret it”.

Referring to the EU chapters that remain closed in his country’s accession talks, Bagis expressed hope that the Irish Presidency will find a way to open as many chapters as possible.

Turkey’s accession negotiations started in 2005, but until Turkey agrees to apply the Additional Protocol of the Ankara Association Agreement to Cyprus, eight negotiation chapters will not open and no chapter will be provisionally closed.