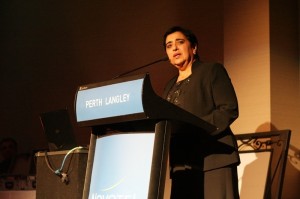 The Cypriot Community of WA were blessed with the attendance of  the Cyprus Foreign Minister Erato Kozakou Marcoullis at their annual dinner and dance.

Speaking during the Annual Dinner and Dance of the Cypriot Community of Western Australia, Marcoullis underlined the difficulties deriving from the stance of the Turkish Cypriot side and its negative positions on core issues of the Cyprus problem, as well as Turkey’s provocative stance and threats against the Republic of Cyprus.  She noted that Turkey questions the sovereign rights of Cyprus to conduct explorations and exploit its natural resources within its Exclusive Economic Zone (EEZ). 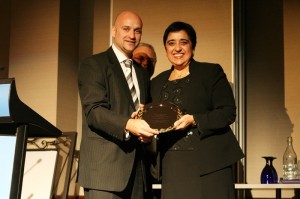 Furthermore Marcoullis elaborated on the positive references as regards Cyprus in the Communique of the Commonwealth Heads of States and Government Meeting, which she attended and which was held in Perth, Australia, on 28-30 October 2011, with the participation of 53 Commonwealth member states.

Specifically, the Heads of State and Government of the Commonwealth reaffirmed the previous Commonwealth Communique on Cyprus and expressed their full support to the sovereignty, independence, territorial integrity and unity of the Republic of Cyprus.

They also expressed support to the efforts of the leaders of the two communities, under the auspices of the UN Secretary-General’s Good Offices Mission, to bring about a comprehensive Cyprus settlement, based on the UN Charter and the relevant Resolutions of the UN Security Council for one state of Cyprus, with a single sovereignty, a single international personality and a single citizenship, in a bicommunal, bizonal federation with political equality, as described in the relevant UN Security Council Resolutions.

Moreover, the Commonwealth Heads of State and Government called for the implementation of the UN Security Council’s Resolutions, in particular 365 (1974), 541 (1983), 550 (1984), and 1251 (1999) and reiterated their support for the full respect of the human rights of all Cypriots and for the accounting of the fate of all missing persons.

The Heads of State and Government of the Commonwealth also extended their full support and solidarity to the Republic of Cyprus in the exercise of its sovereign rights under international law, including the United Nations Convention on the Law of the Sea to explore and exploit the natural resources in its Exclusive Economic Zone.

Cyprus has been divided since 1974, when Turkish troops invaded and occupied 37% of its territory.

Direct talks between the leaders of the two communities began in September 2008 with a view to reunite the island under a federal roof.