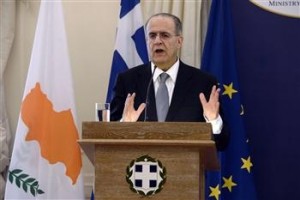 Cyprus talks will resume once the reasons for their suspension cease to exist, Foreign Minister Ioannis Kasoulides said on Sunday.

He added that Turkey will be the only one responsible in case Ankara issues a new a Navigational Telex (NAVTEX) for conducting offshore exploration activities in Cyprus` Exclusive Economic Zone once the talks have resumed.

“This will be considered an act of bad faith,” he underlined.

In statements to the press, Kasoulides said that negotiations would restart from the point they were left.

He added that in the case of fresh talks, the Republic of Cyprus expects that no new NAVTEX will be issued, and the Turkish research vessel “Barbaros” will be withdrawn.

Repeated calls for the withdrawal of “Barbaros” went unheeded by Ankara, which announced in January the NAVTEX`s extension until April 6, 2015.

Invited to comment the fact that Turkey is presenting the resumption of talks as a result of the suspension of exploration and drillling activities in Cyprus` EEZ, the Minister responded by saying that this is just an excuse for Ankara. Kasoulides explained that Italian energy company ENI is now proceeding with the maintenance of its drilling equipment and its platform in Cyprus` Exclusive Economic Zone.

Cyprus has been divided since 1974 when Turkey invaded and occupied its northern third.

The country is currently developing its natural resources, discovered within the Republic’s Exclusive Economic Zone, while several international companies are involved in hydrocarbon exploration and exploitation activities.

Texas-based Noble Energy is expected to develop natural gas reserves, found in block 12, while ENI and KOGAS have exploration licenses in blocks 2, 3 and 9. French Total has recently agreed with the government to continue its exploration activities in block 11.