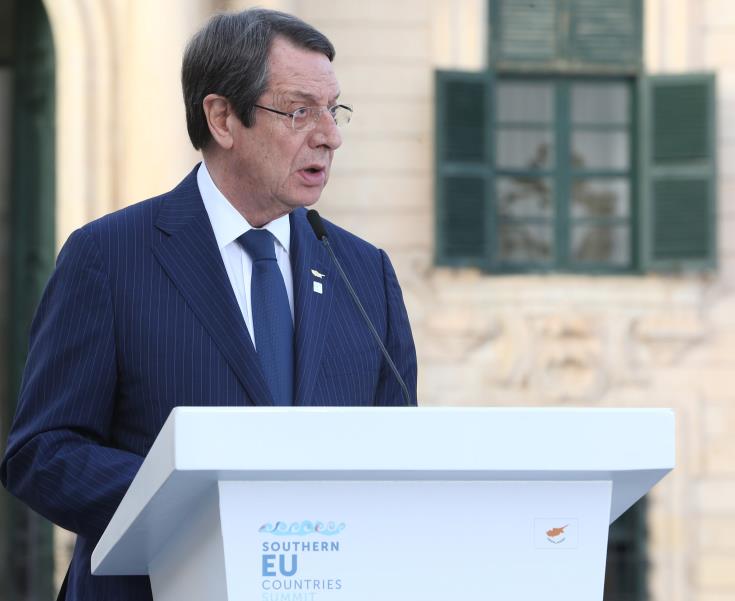 Speaking to the press at the Presidential Palace, the President pointed out that this is our aim (for stronger messages) following the Med 7 Summit in Malta last Friday.

Replying to a question about the extraordinary meeting of the Government Council for Foreign Affairs and Defence (KYSEA) which convened on Sunday in Athens by the Greek Premier, the President said that the Greek government thought it was wise for KYSEA to meet ahead of the EU Foreign Affairs and General Affairs Councils in Luxembourg and the European Council on June 20-21.

Anastasiades added that he was briefed by the Greek Prime Minister and there is an understanding and cooperation on the next steps, pointing out that there was need for any panic to be caused.

In another question whether Cyprus will use its veto at the EU Summit if the outcome does not satisfy our side, President Anastasiades underlined that the proper handling will take place, according to the developments.

He went on to say that we should not make any statements similar to those of Turkey and its rhetoric because this is not the way for anyone to achieve his goals.

Cyprus has been divided since 1974, when Turkey invaded and occupied its northern third. Last month Turkey issued a navigational telex, announcing its intention to start drilling off Cyprus until September 3.

Since May 4, the Turkish drill ship “Fatih”, accompanied by three service ships, is located almost 40 nautical miles west of the Akamas peninsula and 83 nautical miles from the Turkish coast. The area falls within the EEZ and continental shelf of the Republic of Cyprus.